Sony announces the upcoming release of two new SWIR image sensors for industrial equipment. The new sensors capture images in the visible and invisible spectrum and boast a compact size made possible by the industry's smallest 5μm pixel size.

The new products employ Sony's original SenSWIR technology, in which photodiodes are formed on an InGaAs compound layer and are connected via Cu-Cu connection with the Si layer which forms the readout circuit.

When bonding the InGaAs layer, which forms the light receiving photodiodes, and the Si layer, which forms the readout circuit, using conventional bump connections, it is necessary to secure a certain bump pitch, which makes it difficult to achieve a smaller pixel size compared to current industrial CMOS sensors. This had made miniaturization a serious challenge. The Sony's new products, however, feature a smaller pixel pitch made possible by the Cu-Cu connection, resulting in the industry's smallest 5μm pixel size. This, in turn, makes it possible to reduce camera size while maintaining SXGA (IMX990)/VGA (IMX991) resolution, contributing to improved testing precision.

Sony's original SWIR image sensor technology is used to make the top InP layer,*4 which absorbs visible light, thinner, making it possible to transmit light to the InGaAs layer underneath, delivering high quantum efficiency even in the visible range. This design enables imaging in a broad range of wavelengths from 0.4μm to 1.7μm, enabling the use of a single camera instead of the conventional multiple that were required to capture visible light and SWIR. 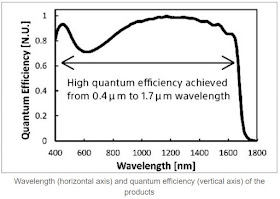 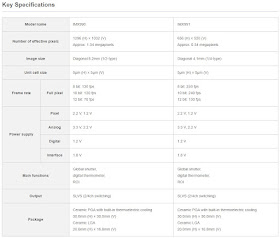