"TSMC’s Fab14 P7 in the Southern Taiwan Science Park suffered a power outage on April 14th. The cause of the power outage was an accidental damage of an underground power cable during construction work nearby.

The diesel uninterruptible power supply (DUPS) of the facility kicked in instantly when the power cable was cut, but there was still a short period of power interruption and voltage drop. As a result, some of the equipment systems in the facility temporarily experienced operational irregularity or malfunction. Based on past experiences with this type of incident, TrendForce believes that it will take 2-7 days to recalibrate the equipment systems so that they can return to normal operation.

...the Fab14 P7 facilities contain 45/40nm and 16/12nm production lines, and the outage will primarily impair end products including smartphones and automobiles

TrendForce further indicates that ... CIS logic products (manufactured at the 45/40nm nodes) are bearing the brunt of the outage’s impact... In particular, Sony CIS 40nm Logic products are primarily supplied for high-end smartphones." 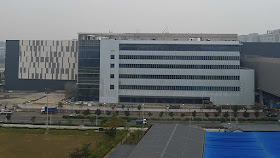