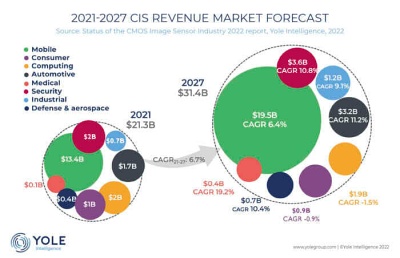 Yole Intelligence says that Sony is looking to consolidate its leading position as the market begins a new growth cycle.

Analysts at Yole Intelligence, the France-based research market company, are predicting that the market for CMOS image sensors is about to begin a new phase of growth - and will be worth more than $31 billion by 2027.

If correct, it would represent a compound annual growth rate (CAGR) of nearly 7 per cent, with the sector recovering from a slump caused by US sanctions on Chinese vendors.

That rate of growth is expected to be propelled primarily by applications in smart phones - the largest single end market for the devices - as well as emerging use cases in the automotive sector and security imaging.

Yole says that the market for CMOS image sensors grew nearly 25 per cent in 2019 - with buyers partly responsible for creating a bubble as they stockpiled devices in advance of those sanctions taking effect.

In 2020 the rate of growth slowed to just over 7 per cent, before the combination of sanctions and supply-chain effects resulting from the Covid-19 pandemic saw growth drop to just 2.8 per cent in 2021.

However, a recovery appears to have begun in the closing quarter of 2021, which is said to have been the best ever in terms of CMOS image sensor production. The market ended up being worth $21.3 billion that year, thinks Yole.

“A new growth cycle is now expected, supported by opportunities in mobile and other markets such as automotive and security imaging,” stated the firm. “In the coming years the [CMOS image sensor] industry growth will at least match the general semiconductor [industry] growth rate, reaching $31.4 billion by 2027 with a 6.7 per cent CAGR.”

According to the analyst team’s figures, mobile phone applications accounted for $13.4 billion in sales in 2021, almost two-thirds of the total market for CMOS image sensors. That sub-sector is expected to grow at a CAGR of more than 6 per cent through 2027, reaching close to $20 billion.

The analyst firm’s figures indicate that Sony claimed the leading market share of 39 per cent in 2021, putting it ahead of Samsung (22 per cent), OmniVision (13 per cent), and STMicroelectronics (6 per cent).

However, that Sony figure is historically low, and the Japanese technology giant is now making efforts to increase it significantly.

“As a consequence of Covid-19 and the US Huawei ban, Sony’s market share faltered in 2021,” Yole explains. “That allowed its competitors to raise their game and play technology catch up.

“However, in June 2022, Sony confirmed its ambition to reclaim its market share, aiming at 60 per cent by 2025. This announcement should reinforce production capacity and research and development [spending] in the coming years.”

In its latest quarterly results announcement, Sony said that its sales of image sensors had been impacted by a slump in the Chinese smart phone sector, but added that it was expecting growing adoption of CMOS sensors with larger die sizes and higher resolution.

"In addition, due to an easing supply and demand equilibrium for logic semiconductors, it has become possible to gradually increase the production of high-value-added image sensors, the production of which was previously restricted due to supply constraints," Sony also pointed out.

The Yole report suggests that the leading Chinese manufacturers - OmniVision, GalaxyCore, and SmartSens - have responded well to the Huawei sanctions, and are now outperforming the competition.

Although its corporate headquarters is in Silicon Valley, and it used to be listed on the Nasdaq, OmniVision was acquired by a consortium of Chinese private equity investors in 2016 - and has since been sold to Shanghai-based Will Semiconductor.

Yole says that of the other Chinese players GalaxyCore is strengthening its position, approaching $1 billion in annual revenues and ranking fifth in the market, just ahead of US-based Onsemi.

Next comes Korea’s SK Hynix with a 3 per cent market share, and SmartSens with 2 per cent. Japan’s Canon and US defense group Teledyne round out the top ten suppliers, with Hamamatsu and Panasonic earning similar shares in 2021. 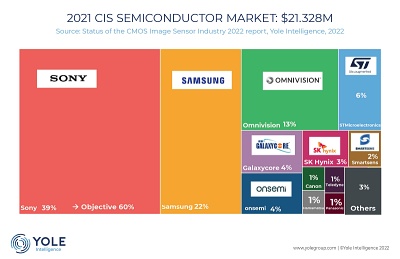